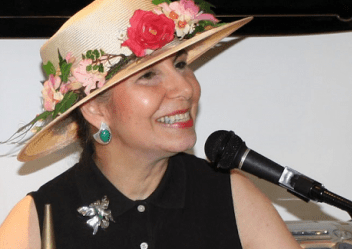 When was it? How did I become the kind
Who failed to cherish life, discarded laughs?

Strange forces urged me out as more snow fell,
Filling the windows, decorating trees,
Avoiding certain branches — — just like folks
Who know how to keep apart. The weatherman
Advised pedestrians to stay indoors.

Barely protected, wearing an old coat,
Worn out boots, steered by impulses alone,
I trudged along until I realized
The yuletide hypnotized my weary eyes.

Against my will, those luminarias
Attracted. Coffined lights, like sentinels,
Marked gates of Cemetery Hill, where we
Had bid adieu. Temptation made me stoop
To steal a souvenir — — when he appeared.

I tried to run. My heavy rubbers clung,
Wet mud imprisoning me like quicksand.
My footprints left a useless trail behind,
Uncertain as redemption once denied.

The faceless creature merged with me. Mid-gait,
My right leg was suspended, awkwardly,
When I heard singing — — yes! — — “Die Fledermaus,”
Our favorite, the last performance Dan
And I enjoyed together — —happy times
Resurrected at Prince Orlofsky’s ball,
As Strauss’s music peeled away sorrow,
A ghostly partner lifting me, leading
Us effortlessly in a waltz. I felt
Like Rosalinde, my shearling a silk gown,
Fond debutante who danced, dipped, all aglow.

As quick as this possession overtook
Me, it departed. My boots made contact
With earth. I watched as the transparent male
Took two steps, disappeared. The sun came up.

I headed home, discovering the snow
Completely cleared away, and whistling
That overture. Attempting to make sense
Of this experience, all I knew was
Words do not live entirely inside
Language and neither does such new found joy.

LindaAnn Schiavo writes: “This ghost poem (pasted in below) is based on an actual New York City yuletide encounter with a spirit.

Back-story:
Right before Xmas, in the mid-1990s, I had just left The Strand Bookshop in NYC.
The sidewalk is unusually wide on Broadway by Grace Church.
But when I saw the ghost, I deliberately altered my path to collide with it.
Poor soul, roaming around, was probably visiting a neighborhood he once knew.
He was wearing a dark hooded tracksuit.
His nylon work-out pants had light stripes down the side of each leg.
He had a slim, athletic build — — a man cut down in his prime.

I just had to “make contact.”
Why? To offer my warmth, my joy, my essence as temporary comfort to this restless spirit.

Process notes:
Twenty years later, I fictionalized it.
My protagonist became a lonely, joyless widow who meets a ghost [i.e., her dead husband].
I imagined an emotional yet mysterious “reunion” on Xmas Eve that would somehow offer comfort to a woman, enabling her to regain her joy even though she can’t quite explain what happened.

After my 1,500-word short story was published and also translated into Russian, I revised it as a poem.”

LindaAnn LoSchiavo, recently Poetry SuperHighway’s Poet of the Week, is a member of SFPA and The Dramatists Guild. Her poetry collections “Conflicted Excitement” [Red Wolf Editions, 2018], “Concupiscent Consumption” [Red Ferret Press, 2020], and Elgin Award nominee “A Route Obscure and Lonely”‘ [Wapshott Press, 2020] along with her collaborative book on prejudice [Macmillan in the USA, Aracne Editions in Italy] are her latest titles.

“A Route Obscure and Lonely” speculative poetry by LindaAnn LoSchiavo is available on Amazon.