Like fishing boats sailing a landless sea,
an edgeless game-board for an endless game,
hauling their random catch from wide-spread nets,
hunting without the hunter’s hunt and aim,
but sailing, drifting, without cares or frets,
so carefree youths under the bowl of sky
will chance their drifting lives on random lips.
And then the Kraken rises, sinking ships. 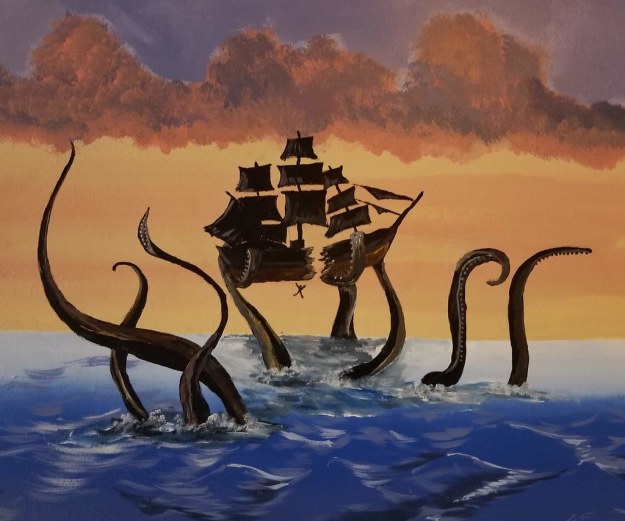 “kraken and ship” by BryanAlexander

“Carefree Youths” was published a couple of days ago in Bewildering Stories. It is in iambic pentameter with irregular rhyme. After the meandering start to the poem (about the youths’ meandering lifestyle), the last line is a hard punchline (reflecting the brutal ending of that lifestyle). There are no sequential rhymes until the last two lines, which thereby become the clear ending of the poem. The form of the poem accentuates the poem’s meaning. That is what form should do.

Final rhyming couplets were used extensively by Shakespeare in various ways. In his sonnets they provide a very strong ending after four quatrains, and is a reason for preferring the Shakespearean sonnet’s ABAB CDCD EFEF GG over the Petrarchan sonnet’s more mannered but less forceful ABBA ABBA CDE CDE. Many of his final couplets are well known – such as:

If this be error and upon me prov’d,
I never writ, nor no man ever lov’d.

Shakespeare did the same sort of thing throughout his plays, in which a scene or a soliloquy will be in blank verse but often terminate in a rhyme. Some of the best-known examples being:

the play ‘s the thing
Wherein I’ll catch the conscience of the king. (Hamlet)

Fair is foul and foul is fair:
Hover through the fog and filthy air. (Macbeth)

Good night! Good night! Parting is such sweet sorrow
That I shall say goodnight till it be morrow. (Romeo and Juliet)

The rhymed sentence helps sum up the scene, and signals that the scene is ending and that a new scene is about to begin – particularly useful since in Shakespeare’s time there were no stage curtains and no real sets to speak of.

Ah, formal verse! So many uses!