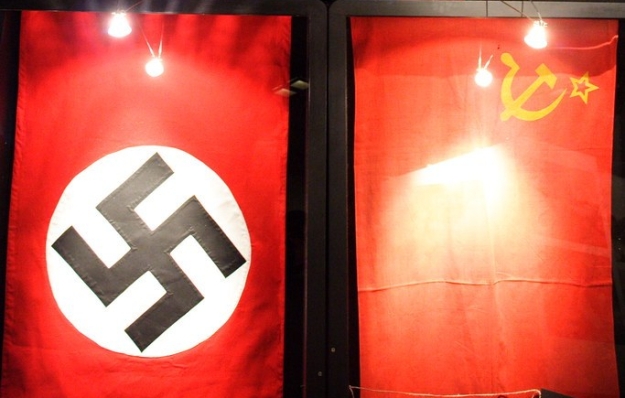 The Swastika, that ancient Vedic sign,
the lightning wheels with which the Aryan bands
in lightning war overrun other lands,
wheeled juggernauts that crush, self-claimed divine.
Hammer and Sickle, commoners’ work-tools;
weapons for rising up, and tearing down
the castle of the rich, the bourgeois town;
fake honour to the poor the Party rules.
A flag with Stripes, memorial for flogged slaves,
striped jail clothes for resulting underclass;
and Stars like bullets through the windshield’s glass
for leaders by the CIA shot down,
star earned for each election overthrown,
star for each land the flag invades, or ‘saves’.

This sonnet was originally and ironically published in Ambit in the UK. The irony being, of course, that the Union Jack is viewed by much of the world with as much fear and hostility as any of the other three flags. But you don’t learn that, or the reasons for it, in school in the UK–at least not in England. The British (at least the English) have a warm and fuzzy feeling toward their flag, and are innocent or puzzled that anyone else should find it negative. Similarly in the times of the other three flags, the Germans (at least the Aryans), the Soviets (at least the Russians) and the Americans (at least the whites) have been happy and proud of their flag, puzzled that anyone else should fear or dislike it.

Another irony: the jury is still out on to what extent one of the leaders shot down by the CIA was their own.

Technically it’s a sonnet with a non-standard rhyme scheme: ABBA CDDC EFFGGE. But the rhymes and the scansion are OK. As for the volta, the requisite turn of mood or argument between the octave and the sestet… well, after dealing with the two great enemies of western democracy, you weren’t expecting me to pick on the US, were you?