1915 to 1955 provides quite a range of poetry! From Hardy, Housman, Kipling, Yeats, through two world wars, to Dylan Thomas and twenty poets younger than him. Editors C. Day Lewis and John Lehmann confined themselves to (loosely defined) British poets, and to those aged at least 30 by their final selection. Among the 260 poems are many standards–Hardy’s ‘Afterwards’, Yeats’ ‘Sailing to Byzantium’, Eliot’s ‘East Coker’, Auden’s ‘Lay Your Sleeping Head’, Dylan Thomas’ ‘Fern Hill’–but the real joy is in discovering good work by less well known poets. I give a few excerpts as examples: pastoral, autobiographical, of mortality, a war poem, wistfulness:

The cuckoo’s double note
Loosened like bubbles from a drowning throat
Floats through the air
In mockery of pipit, land and stare.

And one tree-crowned long barrow
Stretched like a sow that has brought forth her farrow
Hides a king’s bones
Lying like broken sticks among the stones.

Then it was she put up her hair,
inscribed her eyes with a look of grief,
while her limbs grew as curious as coral branches,
her breast full of secrets.

But the boy, confused in his day’s desire,
was searching for herons, his fingers bathed
in the green of walnuts, or watching at night
the Great Bear spin from the maypole star.

Cold is the lake water
And dark as history.
Hurry not and fear not
This oldest mystery.

This strange voice singing,
This slow deep drag of the lake,
The yearning, yearning, this ending
Of the heart and its ache.

Keith Douglas, ‘How to Kill’

Now in my dial of glass appears
the soldier who is going to die.
He smiles, and moves about in ways
his mother knows, habits of his.
The wires touch his face: I cry
NOW. Death, like a familiar, hears

and look, has made a man of dust
of a man of flesh. This sorcery
I do. Being damned, I am amused
to see the centre of love diffused
and the waves of love travel into vacancy.
How easy it is to make a ghost.

Do you resemble the silent pale-eyed angels
That follow children? Is your face a flower?
The lovers and the beggars leave the park–
And still you will not come. The gates are closing.
O it is terrible to dream of angels.

As a collection the poetry is overwhelmingly formal, rural and male. It is titled ‘The Chatto Book of Modern Poetry’, but it predates the formless chaos of what we now call “modern poetry”, the unstructured confessional outpourings of the past half century. The anthology isn’t perfect, but very rewarding for lovers of traditional poetry. (Not hard to find. Used hardcovers are available from $0.99 on Amazon.)

With islands as appetisers before the main course
Irma prepares to swallow Florida whole
With a sword-swallower’s brash control,
The fellatrix without remorse.

The circular saw of Irma prepares to slice the length of Florida…
But trim the east coast? Trim the west? Or just go forth
And cut a clean line up the center, south to north,
Right through the Magic Kingdom like some sarcastic orator?

And here comes Hurricane Jose,
Pursuing Irma like a barracuda,
A dog lifting a leg on poor Barbuda
To piss where the bigger dog pissed yesterday.

Meanwhile off Africa there forms a new farrago
As God prepares another bowling ball along the hurricane alley…
Can He slide one between Cuba and the Bahamas with this sally
And curve it in to take out Mar a Lago?

With the new hurricane season just kicking off, it seems like a good time to reflect on the hopes and fears we live with all the time: the fears of things going really wrong, the hopes that they will mostly go wrong for the people we dislike. Humans, what can I say…

This poem was first published in The Hypertexts, the massive anthology of poetry–predominantly contemporary, English-language and formal–assembled by Michael R. Burch. It’s an honour to have my own page in the company of some 300 contemporary poets from Wallace Stevens to A.E. Stallings… and others from Lorca to Blake and right back to Sappho.

“Hurricane Irma” happens to meet the preferences of The Hypertexts in several ways: casually formal, flippant about religion, and with a loathing for Donald Trump. A perfect storm, as it were, for inclusion in the anthology. 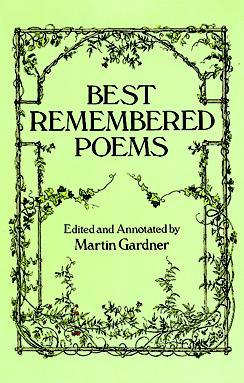 Perfectly competent, and with interesting trivia and useful background notes by Martin Gardner, this selection of “Best Remembered Poems” is pedestrian almost by definition: these are the ones that are best remembered by Americans, so there will be very little that is new and exciting–and honestly, a lot of the poems best remembered from high school English lessons on the 19th and early 20th century… are downright boring.

But if you’re looking for a book that contains most poems that most non-poets vaguely remember… that contains both ‘The Charge of the Light Brigade’ and ‘Casey at the Bat’… then this is the one for you!

The single best anthology of light verse that I know. Over 500 poems selected by Pulitzer Prize winning commentator Russell Baker (and with an excellent introduction by him). Everything from ‘Summer is y-comen in’ and its modern parodies, to Shakespeare and Marlowe, Noel Coward and Cole Porter, Don Marquis and Phyllis McGinley, Allen Ginsberg and John Lennon. 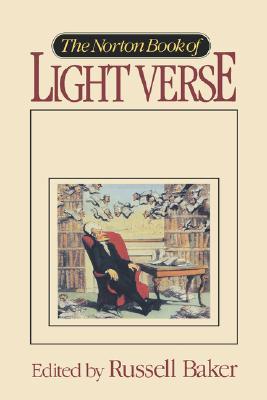 Light verse lends itself to the use of form, and most of the poems are formal. Rhyme and meter make it easier to remember verse word for word, but there are bits that I remember, have known since my school days, that don’t share those attributes. For example, Cummings’ ‘Nobody loses all the time’

(and down went
my Uncle
Sol

and started a worm farm).

But such pieces are the exception. By the far the majority of light verse is going to rhyme and scan, and that is part of its charm.

As most poets only get one or two poems in this anthology, there are a couple of hundred poets represented. The book is therefore an excellent way to broaden your awareness of English-language poets – though if there are any outside the British-Irish-American area, I’m not aware of it. This limitation, and the fact that the compilation dates from 1986, are the only negative things to say about a superb and memorable collection.